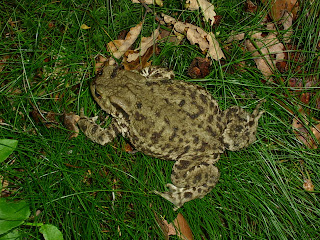 Here are some wildlife sightings from Paul Booth, the manager of Rimington Caravan Park:
(Toad photo) I came across this little fellow whilst out in the fields opposite the caravan park...the dogs were most impressed!!!
20/3/09 My two boys were very excited to see frog spawn in our garden pond (we "rescued" the pond and all its occupants from one of the Park Homes on site last summer)
22/3/09 Came across a fine example of a Hedgehog on the site (approx 40cm long) obviously had come out of hibernation after the recent spell of warm weather.
25/3/09 Sadly and rather tragically a dead Badger on the A682 near Gisburn, the first I have seen in this area either dead or alive.
27/3/09 Plenty of Lapwing and Curlew activity in the fields behind the house together with a large mixed flock of Fieldfare and Redwing.

Posted by Elizabeth Louise Mills at 04:00 No comments:

Lower Fairsnape Farm 18/03/09 saw my first bat of the year at dusk flying over Bleasdale cottages. 20/03/09 up at Stocks Reservoir saw my first two bumble bees of the year zipping around the car park and my first toad of the year sunning itself by the picnic tables. Sunny, mild weather all week. Wood anemones coming out in old hedge bottoms and woods and rich yellow celandine flowers appearing. Wild garlic leaves greening up the woodland floors.

Posted by Elizabeth Louise Mills at 03:19 No comments:

Up at Lower Fairsnape again. Lots of sunshine but very cold and quite windy. Sat in the birdhide to look for hares. Eventually found four spread out across the field making a superb job of looking like mole hills or grassy tussocks. All either feeding or stretching out in the sun and not taking much interest in each other, though one got chased off by two rabbits. Looked beautiful whenever the sun came out and made their fur a rich red that then stood out against the dead grasses. Saw my first ever close up view of a Redshank and realised I have been hearing their calls for ages but not known it. The redshank came and sat on a fence post right by the hide, it's plumage looked so soft and insulating though I thought it's legs looked more orange than red. All around there were lots of pairs of lapwings and Curlews. The lapwings kept making dizzying display flights and mobbed any crows that flew over and mobbed an unfortunate hare that got too close. Saw several Redshank flying down to the scrapes and a flock of what looked like thrushes in the far distance, probably Fieldfares(?) A large flock of starlings took off and whirled overhead. As we drove off a large hare strolled into the road ahead of us and ambled off, a lovely end to the day.

Posted by Elizabeth Louise Mills at 11:54 No comments:

Saw a large flock of lapwings in field bottom near river at Whitewell.

Drove through Trough of Bowland on way to Forrest Hills Outdoor Centre. Saw a huge woodmouse bounding through beech leaves at edge of wood. Reversed for a second look as so big initially thought it was someones escaped gerbil. Living next to picnic area so probably rich pickings even over winter, looked very healthy.

Lots of lapwing and curlew pairs around now.

Saw first hedgehog of the year as dusk fell at Forrest Hills.

Lovely drive back through the Trough of Bowland, the low sun catching the dead bracken and grass and turning drab browns into rich chestnut reds and straw golds. Saw a Black Grouse by side of road, camera in the boot! Typical.

Posted by Elizabeth Louise Mills at 02:51 No comments: 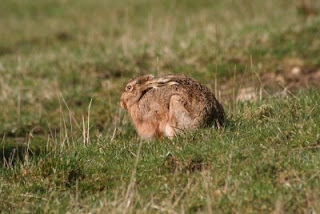 Fantastic day out in beautiful Bleasedale and visited Beacon Fell Country Park, which I'd never been to before. Visited Lower Fairsnape Farm, run by Robert and Anne Gardner, Several pairs of curlews displaying and calling, one even dive bombed another. Plenty of Lapwings with their strange bazooka-like calls, displaying and feeding . Also saw several Red-legged partridge oystercatchers and a huge buzzard being mobbed over woods near village hall. Got lovely photographs of hare sat in gateway opposite the Gardners house. Barrie crept up on it to get photos, but obvious it had seen him, when he stood up it looked vaguely interested but didn't run off, too busy enjoying the spring sunshine. Anne showed me gaps in walls of barn and cottages that Grey Wagtails nested in last year and were checking out this year. Above doorway of one of the cottages there is a slight niche that a kestrel roosts in, if the wind direction changes, Anne told me it goes round to another niche instead. Found several pellets below both roosts, hadn't realised Kestrels produced them. While we were talking a pair of Kestrels wheeled above us, calling to each other, looking stunning in the sunlight.


Had a tasty toasted cheese sandwich and coffee at Beacon Fell Country Park, so warm and sunny we could sit outside. Meal was accompanied by the amorous croakings of hundreds of frogs in their pond that were frantically spawning. Rangers said frogs literally arrived overnight. 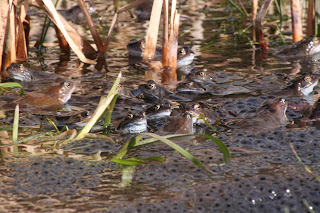 Posted by Elizabeth Louise Mills at 08:18 No comments: