It was so hot and humid last night Bramble didn't want her walk until 10.30pm. Took her off in the car to Coal Pit Lane. Nice gentle breeze had picked up and the headlights picked out lots of moths and young rabbits feeding on the flower filled verges. Parked up and walked along our favourite bit with the elegant pale limbed mature beech trees. The air was rich with the heavy scent of Honeysuckle, it smells nowhere near as strong during the day. Absolute silence until two Curlews decided to have a bit of a barney, calling loudly overhead and at one point clashing in mid-air and flying low across the road. Never seen anything like it. Watched the ghostly form of a hare running across a newly mown field in the half light. Lots of bats were flying around and overhead probably feeding on the large numbers of midges, two people and one ferret attract. Bramble unfortunately discovered she could catch the slow moving Toads that were out at this time of night, so we ended up doing an unofficial survey of their population density, 5 in about 15 minutes. Luckily she drops them as soon as she tastes them. Wonder if Polecats eat them in the wild? I think the toads must have been coming out to sit on the tarmac and warm up. Came home as darkness fell about 11.15 pm to rumbles of thunder though didn't see any lightning.
Posted by Elizabeth Louise Mills at 02:19 No comments:

Went over to Arnside and Silverdale for the day. Went via Ingleton and amazed by the swathes of Ox-Eye Daisies growing on the verges especially near Whoop Hall, like snow drifts. Went up to Arnside Knott, lots of ants everywhere and saw a poor Harvest man covered in red mites. Visited Gait Barrows, saw a Brimstone Butterfly and a Speckled Wood. Felt like a hobbit walking amongst all the large Yew trees. The ground was crawling with Wood Ants and we came across two large nests about a couple of foot high that were a mass of activity with ants bringing in flies and ladybirds and yew leaves to add to the mound. Fascinating but I didn't feel inclined to stand still too long as they started to investigate rucksacks and cameras. Startled a reddish coloured deer and as we walked into a newly felled clearing we came across four fallow deer, one with little antlers covered in velvet, all were being horribly bothered by the flies we could see buzzing around them. Stopped off at Warton Crags on the way home to have tea and watched Jackdaws noisily wheeling around. Saw pale bird fly in and land on rock face and Jackdaws seemed agitated. Excitedly focusing on where bird landed in case it was a peregrine and just decided it was a pigeon when a peregrine flew in and tried to grab it. The pigeon escaped by a whisker and the peregrine took off after it, both unfortunately flying off behind trees. On drive home stopped off to look at wildflower meadow at Dalehead Chapel. Lots of Orchids, Yellow Rattle, Agrimony,Red Clover, and Lousewort. Barrie also managed to get a photo of a Chimney Sweeper Moth, which I'd not seen before.

Posted by Elizabeth Louise Mills at 04:03 No comments:

I wanted to paint this Hare as it reminded me of a lovely evening walk we took to the top of Weets with its far reaching views. The hare was just feeding on the lane with the sun behind it and it looked magical.

The frog was one of many males waiting for the females to arrive at the pond outside Beacon Fell visitor centre, they all had such amiable expressions, though they weren't so amiable with each other when the females did turn up. 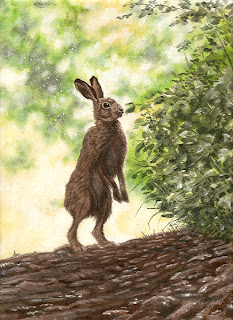 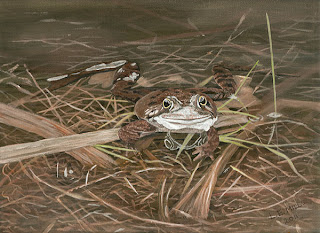 Posted by Elizabeth Louise Mills at 03:55 No comments:

We have two female woodpeckers coming to the garden with one fledgeling each. One is still feeding its chick which looks more mottled and fluffy than the other. The other chick was left by its mum yesterday after she had fed it. It looked a bit lost sat on the tree trunk in the rain. Eventually it had a go at the feeders first pecking at the plastic of the seed feeder, then had a go at the fat ball holder and fell off! We don't think of animals having to learn like we do, but it certainly wasn't coming naturally. It did get the hang of the peanut feeder and was feeding happily till the other woodpeckers showed up and got pecked very hard on the head by the other mum,  who started to feed her chick with the other sat some distance away. This morning the fledgeling seems to have got a lot of confidence seeing off other birds from the peanuts and we have seen the younger fledgeling feeding itself though it is very nervous. 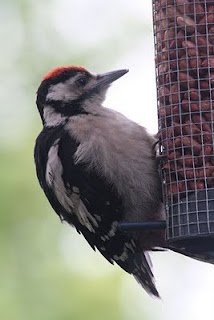 Juvniles have red on the crown. 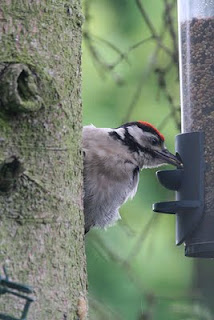 Getting to grips with feeding itself.

More Woodpecker You Tube Video
Posted by Elizabeth Louise Mills at 03:44 No comments:

Decided to make the most of a lovely sunny afternoon and did a circular walk taking in Black Moss Reservoirs and moorland areas with views of Pendle Hill. Got really hot even in the early evening though a light breeze picked up. Meadow Pipits seemed to be everywhere either sat on top of drystone walls or flitting from tussock to tussock with the air full of males sweet song proclaiming their territories. Saw one Reed Bunting.We came across a large flock of Starlings feeding in a marshy area with another noisy group sat on top of the drystone walls nearby. Small groups kept flying in, then splitting off, some birds joining some birds leaving, all the while keeping up a noisy chattering. Also watched a pair of Curlews in the hope we might see some chicks but no luck. At home we have baby Blue Tits and baby Greenfinches visiting the feeders. Watched the Greenfinch beg the feeder for food by quivering its wings - eventually got the hang of it! Chris Packham would probably say that while a fledgling Blue Tit is perfect as a design for life its probably destined to die in the summer time as a meal for a Sparrowhawk. Still at least they get to see the sun for a short while though not  to enjoy an Indian summer! 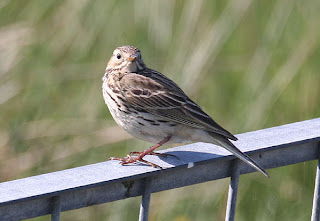 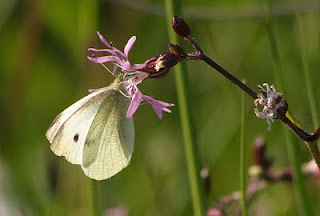 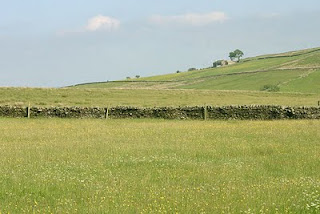 Fields are full of masses of Buttercups. 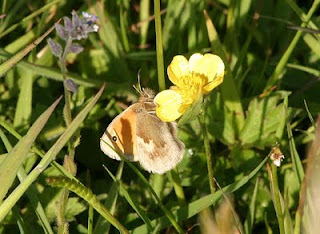 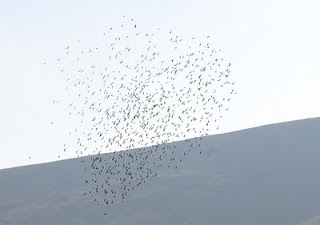 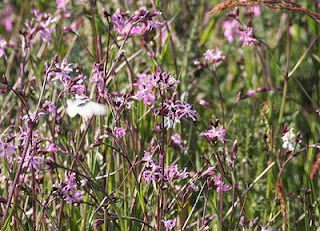 Lots of Ragged Robin in damp areas
Posted by Elizabeth Louise Mills at 05:27 No comments: