The longer days are encouraging me to start thinking about the garden and planning what to grow. We will have a go at a few veggies this year but we also want to have lots of insects in the garden, apart from midges who need no help here. If and when we get the polytunnel up, I would like to have a go at "three sisters" planting, sweetcorn plants support french beans and pumpkins or courgettess grow along the ground, making best use of all the space available. Lovely moths  fly around our windows at night so window boxes will be planted up with nicotiana, stocks and mignonette. Looking back through photos from last summer and reading old diary entries made me sketch out these baby swallows that fledged in our barn. There were 5 altogether and goodness knows how they all fitted in one nest. Maybe their parents made the nest so small to encourage them to leave. 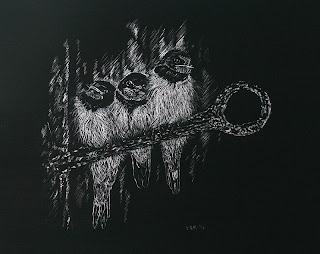 Posted by Elizabeth Louise Mills at 03:12 No comments:

We found what we think is the form of a hare in the snow where it must have seen out the worst of the heavy snow we had overnight . There are hare tracks all around it.

Posted by Elizabeth Louise Mills at 06:40 No comments:

There has been a bit of a thaw, though more snow is forecast. I'm spending so much time keeping fires going that I'm starting to feel like the keeper of the eternal flame in a Lord of the Rings type book. If the fires go out gloom and despondency will spread throughout the kingdom and all that. Looking through photos from spring last year I found this one of cute bunnies though I didn't think them so cute at the time eating my newly planted garden. I did this quick scraperboard picture this morning. Posted by Elizabeth Louise Mills at 05:28 No comments:

All it takes is just a little bit of sunshine to lift my mood and make me feel like I'm living in a Christmas card. We went for a walk and found lots of tracks in the snow, some easy to identify, others not so. The setting sun gave the snow a blue and lilac cast and the low light helped pick out the tracks. I think the mole burrowing under the snow is my favourite, there were lots of burrows and little hills were it had come up to look round and several larger molehills.

Posted by Elizabeth Louise Mills at 02:25 No comments:

We've had a good couple of inches of snow overnight and its still snowing. Its bitterly cold outside in the wind and its 3 degrees celcius in the bathroom and 5 degrees in the kitchen. We brought the hedgehog in last week as we were worried it might still be too little to survive hibernation. Its been troughing away but stopped last night so we are worried the kitchens so cold its hibernating! We have at least 8 Blackbirds in the garden and 6 Robins and at least 10 cock Pheasants. There are two jumpy squirrels and Jays make lightening raids for crusts of bread they can fly off with.We seem to have lost our Long-Tailed-Tits, maybe the fat balls are too hard for them to peck or the regular visits of the Sparrowhawk have put them off. We are crumbling up the fat balls onto a tray in the hope of enticing them back, although at the minute its the Robins that are enjoying them. The farmer was up feeding the ewes extra rations, they were scanned last week and there are 300 sets of twins and 19 sets of triplets as well as single lambs due in March.

Posted by Elizabeth Louise Mills at 02:32 No comments:

Its cold and frosty in the mornings and recent snow still covers the ground, but dawn breaks with a lovely pink glow in the sky and sunset can be spectacular with a fiery red glow spreading out from the sinking sun. All the birds are getting very territorial, especially the Robins and the Dunnocks who have aerial battles zooming around the garden. We have at least 5 Robins, who seem to have loosely paired off. We also have 5 male blackbirds - up to now I have only seen one female. The male pheasants are starting to develop ear tufts and square up to each other. They stand face to face head bobbing and pecking the ground, poised to leap, making a repetitive curr-a sound. They also walk alongside each other with the facing wing drooped and feathers fluffed up, trying to make themselves look bigger.
We have found deer prints in the snow by the bird table so have started putting out hay and pony carrots. We also put out chopped apples as we have had a redwing in the garden and on Sunday there was a huge flock of them feeding in the field behind the house. Jays come in too but are very nervous staying just long enough to pick up some bread. On Monday we saw our first lambs of the year just outside Slaidburn.

Posted by Elizabeth Louise Mills at 05:07 No comments:

The Christmas tree has come down now and its hard not to feel a little  bit colour starved. Outside everything looks grey and bare and most days the house is engulfed by mist rolling down the hill and laying siege to us for all of the day. Its rained so much the sheep's fleeces are washed brilliant white on top with a muddy frill along the bottom. The birds however are far more optimistic than me, during the day the woods ring with the sweet song of the Robins and the not quite so sweet songs of Great Tits laying claim to their territories. At night we enjoy the hoots of the Tawny Owls and if we are out walking Bramble the occasional mad cackle of a Barn Owl (either that or we have worrying neighbours). Saturday was dry and fine after a misty start and we sat on a tree stump in the lane admiring the sunset. A flock of around 120 geese flew over followed a little later by a flock of starlings, all the birds were heading towards the coast so we wondered if they were going to roost at Leighton Moss. We have a Sparrowhawk regularly visiting the garden, it sits on top of the birdfeeder waiting for small birds to break cover. All the Long tailed and Coal Tits hide in the holly and the Sparrowhawk makes sorties to fly around and around it hoping to panic the little birds out.


Posted by Elizabeth Louise Mills at 08:28 No comments: