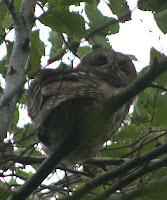 Hare hiding in grass at Bleasdale
Posted by Elizabeth Louise Mills at 05:45 No comments: 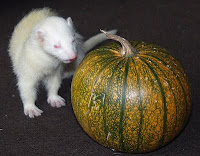 This is the first year I've tried to grow Pumpkins, lots of fruits but only one got big and matured. Very proud but Bramble unimpressed.
Posted by Elizabeth Louise Mills at 02:24 No comments:

Email ThisBlogThis!Share to TwitterShare to FacebookShare to Pinterest
Labels: Ferrets

Had a walk around Gisburn Park. Sweet Chestnuts covered with spiky husked fruits. Hornbeams look very elegant and attractive with their bright yellow foliage and long drooping clusters of nuts in their leafy bracts. Have yet to find any acorns on any oak trees though I've found plenty of marble galls and artichoke galls. Horse Chestnuts seem to have less conkers too. Seems a good year for berries though, the Hollies and Rowans are covered with them. Hawthorn has done well too though not as well as last year when they were spectacular. Jays and Grey Squirrels are easier to spot now as they are so busy making their winter stockpiles. Still got wasps flying around and plenty of spiders are getting into the house. Bramble my pet ferret has developed an unfortunate partiality to House Spiders. There was a full moon on Sunday, so bright it was hard to sleep, lovely to go out walking in. The birds are starting to come back into the garden to feed, really pleased to see a little Wren bobbing around. Found a Woodlouse in my compost bin moulting its old skin, really surprised as didn't think they lived long enough to need to do that. 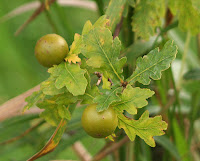 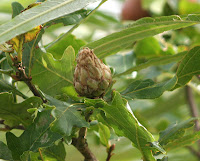 Hornbeam Nuts
Posted by Elizabeth Louise Mills at 01:05 No comments: