I think the starlings must be reading my blog and realised I was a bit disappointed they'd moved roosts up at Stocks Reservoir so they decided to visit. I opened the curtains at 8am this morning and there must have been at least a hundred in the garden and trees. We had gone up to the hide at Stocks yesterday in the hope we'd see them again but unfortunately they were at the other end of the reservoir and going into a roost on the opposite bank. We did get a fantastic sunset though. 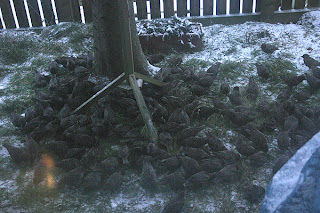 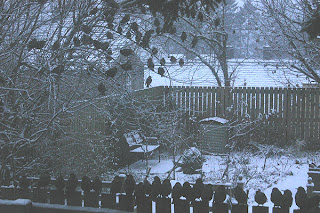 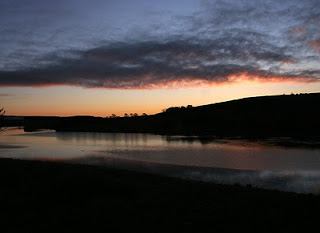 Posted by Elizabeth Louise Mills at 01:32 No comments: 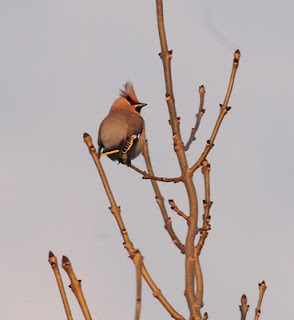 Very cold but sunny day on Friday. Went up to Stocks and was watching Fieldfares when a flock of grey-pink birds flew in and landed on trees down by shoreline. About a dozen more flew higher up and landed in trees by path leading from cafe to jetty. Stunning birds in late afternoon sunshine, looked far too exotic to be here. First time most of us had seen them. Watched starlings in distance circling over water, seemed to go down on opposite side of reservoir and when we went to previous roost site it was silent and empty, with only a lone Tawny Owl sat waiting on the wall. Maybe it's scared them off or perhaps this roost is just too exposed now the weather has turned harsh.
Posted by Elizabeth Louise Mills at 02:58 No comments:

We have just got back from watching the Starlings coming in to roost up at Gisburn Forest. Please excuse the excess of adjectives, but it was superb, amazing, fantastic. Never mind Autumnwatch and Aberystwyth Pier. We very nearly didn't bother going as thick fog had come in, and we thought we would see very little, but if anything it added to the drama as the birds emerged out of the fog, above the reservoir. We assumed we'd missed the main event as small groups passed overhead heading for the inlet, though even the noise from their wings was quite loud. Then suddenly from out of the fog, a dark mass emerged heading towards us, passing over the causeway like a  living transparent creature, the noise was overwhelming and I could only look up open-mouthed in awe ( not the wisest thing to do, though they got a direct hit on Barrie not me!). We decided to drive back into the forest to see if we could spot the roost, no problem the noise was a giveaway. Starlings were settling into the spruce on either side of the road, individual calls joining into a gurgling roar like a stream in spate - I actually looked for a rushing stream, I couldn't believe the noise was them. Birds were still coming in and jostling for position,making the tree tops wave. We stayed as long as we could, but by 4.30 pm the cold fog was getting to us softies - I don't envy the starlings the night to come. 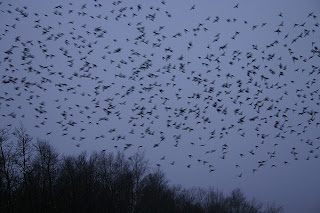 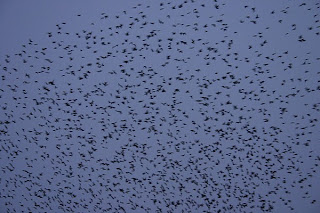 Posted by Elizabeth Louise Mills at 10:38 No comments: 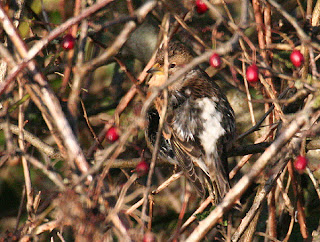 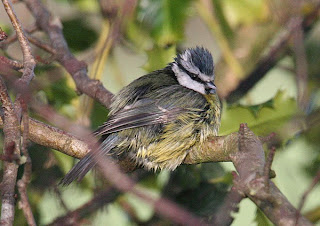 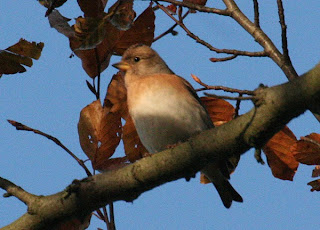 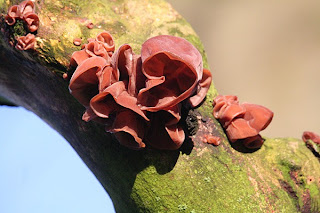 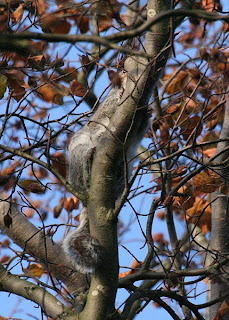 Squirrel trying to hide.
Posted by Elizabeth Louise Mills at 03:38 No comments:

Really wet and windy Monday, we had to travel to Hornby so decided to go over Cross o' Greets. Flocks of Fieldfares in hedgerows and fields full of flocks of feeding starlings. Almost hit a Sparrowhawk that flew low and fast in front of the car, intent and fierce eyes. Trees mostly shed their leaves now though oaks still holding their now orange leaves and surprised by how many oaks there are. Some of the roads we went on had had very little traffic and were strewn with colourful leaves and yellow larch needles, the rain bringing out the intensity of their colours. Snow must have fallen in some quantity overnight as there was snow on the top of Pendle Hill and snow on hills around  Cross o' Greets and lumps of melted snow as we drove through . On way home just after sunset we saw one solitary Hen Harrier on its own then it turned and flew off over a dip in the land. Then 5 other birds  rose from behind the dip, it joining them, flying together with the mist rolling off the hills behind. By the time turned the car round had lost sight of them in the mist and trees.  Barrie thinks he has heard they roost together communally. Stunning sight. Also saw a buzzard a bit further on and wondered if it had spooked them.
Posted by Elizabeth Louise Mills at 05:16 No comments:

Breasted Goose amongst some Pink Feet Geese at RSPB Marshside, I viewed

it from Nells Hide looking towards Marshside Road. I have read up on

these and they should be in South Eastern Europe. Please could you post

Gareth Evans
Posted by Elizabeth Louise Mills at 06:34 No comments:

On Saturday we  walked the lanes up near Rimington looking for fungi, haven't a clue what most of them are, but the colours and shapes looked very striking against the dull earth and dead leaves. 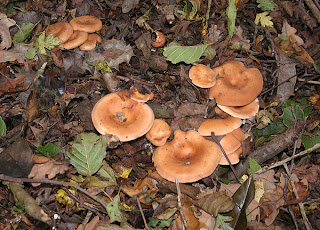 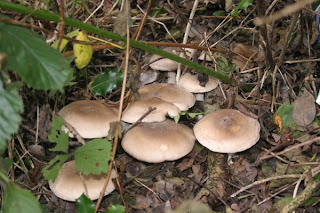 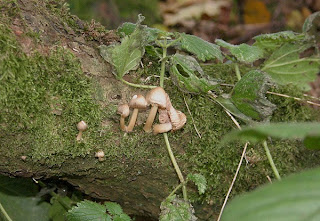 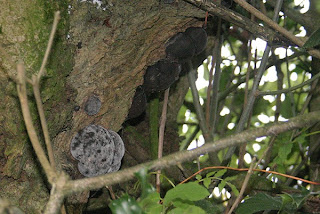 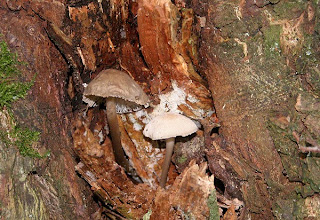 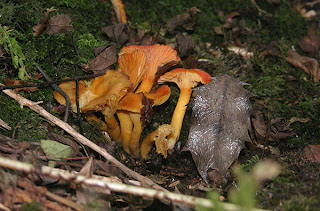 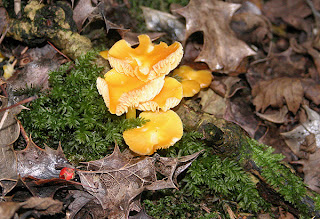 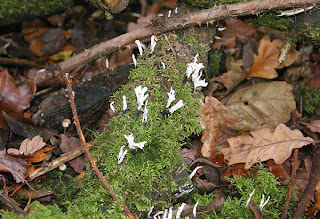 My gran called these Stags Horn . 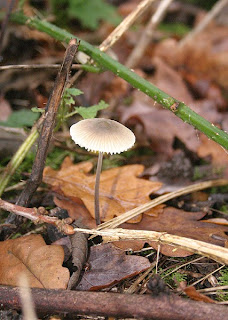 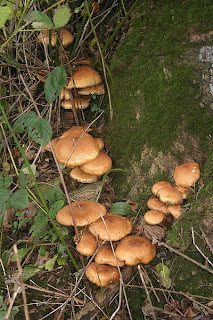 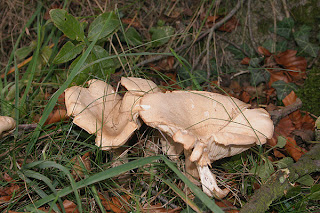 Posted by Elizabeth Louise Mills at 02:43 No comments: