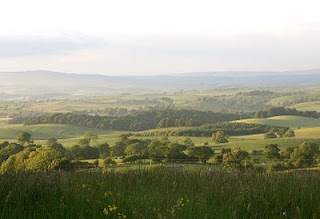 Went for a lovely evening walk last night around Todber, as we walked up to Brogden Lane we got fantastic views over the drumlin field towards the Dales, the low sun hightlighting the drumlins gentle curves. 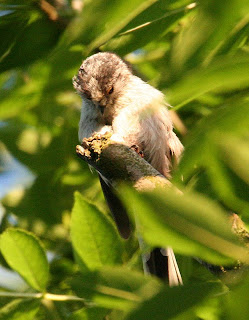 Great Tits, Blue Tits and Longtailed Tits all feeding fledglings, we could hear them calling as they worked their way through the tree tops. Barrie managed this shot of a Longtailed Tit fledgling way up in the canopy. 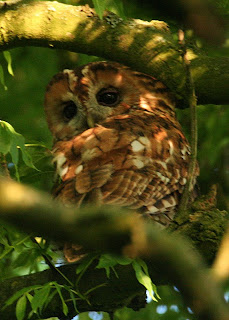 Barrie spotted a Tawny Owl, all I could see was a sun dappled tree till it turned round and fixed its huge brown eyes on me (or was it Bramble ?). It sat tight for a minute or so, with Blue Tits and Great Tits coming within inches of it - either they hadn't noticed or didn't feel it was a threat as it wasn't actively hunting. It took off with silent wingbeats. Amazing. 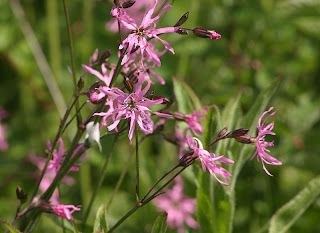 The hedgerows are full of flowers, Ragged Robin and Yellow Loosestrife waved among the grass flower heads and Honeysuckle, Dog and Hedge Roses filled the evening air with their perfume. There was a lovely sunset and we sat and listened to the welcome breeze stirring the beech leaves as the setting sun edged them with gold.
Posted by Elizabeth Louise Mills at 13:05 No comments:

Female Great Spotted Woodpecker and fledglings are daily visitors to our feeder by the bedroom window. Only slight niggle - starts hammering away at the peanuts about 5.30 am, whilst constantly softly calling (sounds like a small dog yapping in the distance). I will grind up some peanuts and put them on the bird table then we will all be happy. The young Woodpeckers are stunning and wait patiently in the fir tree to be fed, annoyingly when she does, she takes them into denser foliage so I can't photograph them. We also had a young Carrion Crow in the garden, this sent our local Jackdaws potty, they really were not happy. Found a Narcissus fly in a friends garden in Foulridge, thought it was a Bumble Bee at first till I noticed its eyes and flat abdomen. We had a walk from Cross o' Greets and saw some Large Red Damselflies flying in tandem by an iron stained pool. Every so often a pair would bob down to the water surface so the female could lay her eggs, wings glittering in the sun. We also saw two Gold Ringed Dragonflies flying over the water and resting on heather - if they are not please tell me.

Posted by Elizabeth Louise Mills at 04:46 No comments:

Its been a wonderful week weatherwise here in Gisburn, long sunny days with a pleasant breeze, making a walk in the countryside very inviting. Treetops and hedgerows are full of fledgling Blue Tits and Great Tits insistently calling all day long to their poor harassed parents who look very tatty. Watched a pair of Blue Tits feeding their young all constantly calling as the adults worked their way through one tree gathering beakfuls of caterpillars, then all at once took off as one to the next tree along, and carried on in this way along the hedge. One Blue Tit seemed to think its sibling was being unfairly favoured over it and edged along the twig until it was above its rival then landed on it knocking it off its perch! We have also been watching a family of Blue Tits nesting in a broken bough, the parents squeezing through tiny holes to feed their noisy young, who are starting to look out of the entrance, hopefully they'll fledge soon. Watched a Grey Squirrel collecting fungus. Saw three woodpeckers all sat on a tree trunk, noticed them as heard drumming, do youngsters get lessons? Friday afternoon saw a large flock of Lapwings near Foxhill Barn, wheeling and calling, also saw a Bullfinch in the hedgerow, Bullfinches have the most boring call I have ever heard. Female Woodpecker and young are coming to peanut feeder in garden, female keeps pecking twigs off Fir Tree and chucking them away.

Posted by Elizabeth Louise Mills at 02:19 No comments:

Very muggy overcast day. Went up to Stocks Reservoir for a walk, followed by a drink and cake in the cafe there( The tiffin and the chocolate cake are both very good). The water level looked very low, though the fishermen said it often gets lower. On drive home in late afternoon, near Slaidburn, we saw a Little Owl with one youngster sat on a drystone wall, both took off when we stopped. Near Bolton by Bowland we saw a Tawny Owl hiding in a tangle of hawthorn, and then as we neared the bridge over the Ribble, we saw a Sika Deer grazing quietly on the roadside bank before nonchalantly hopping over the fence back into the cover of trees.
Posted by Elizabeth Louise Mills at 02:51 No comments:

Up early to a damp, humid and overcast morning. Went for a walk over fields cut and cleared for silage over the weekend. Large flocks of Starlings, Jackdaws and Herring/Blackbacked Gulls feeding amongst the pale yellow stubble. The starling flocks had plenty of light brown juveniles and were all in constant noisy conversation, taking off and wheeling off to new areas of the field as one. The gulls had brown youngsters with them too, the adults keeping stern yellow eyes on me. Watched two young Jackdaws push their luck with a couple of adults. The rather large youngsters kept begging for food and eventually the adults lost their tempers and flew at them, pecking and flapping. The stunned youngsters huddled together looking very forlorn.
Lucky enough to see three hares. The first was very big and dark and didn't notice me, seemingly caught up in a race with a low flying swallow, got to about twelve feet from me, leapt up in mid-air, turned round and raced away to top corner of field. The second was just sat in a gateway in the lane and quietly slipped away behind the hedge. The third was further down the lane hopping along ahead of me. The lane is awash with Cow Parsley, dotted here and there with Red Campion, amongst the grass there are plenty of Lords and Ladies flowering though they've got soggy and battered by the recent heavy rains.
Daft as it sounds, I had been getting worried about the lack of slugs and snails in the garden. (Everythings a meal for something else.) Plenty around today, lots of White Lipped Snails with their pale yellow shells striped with brown amongst the grass and Cow Parsley, and slugs and snails grazing on wet tree trunks up to about 3ft.
Posted by Elizabeth Louise Mills at 02:25 No comments:

Saturday was very hot and sunny, and we went to visit an elderly friend and look round her garden. The heat was overpowering in the early afternoon and we all ended up sat by her little pond with a drink watching her goldfish with me trying to convince her that her newts were gorgeous. The newts were lounging at the water surface in little groups underneath lilly pads, little parasols to protect themselves from sunburn! Like us the heat had made them dozy and they were easy to catch and show to our friend. The females dull khaki and fat with eggs and the males speckled with black and gold spots. At the side of the pond we watched a male doing his waggle dance in front of a female. Our friend wasn't totally convinced of the beauty of newts especially when we noticed a newt hitching a ride on the back of her goldfish! I don't know how anyone could resist a creature with such an amiable smile! Her pond is only tiny and has one goldfish in it and is regularly topped up with a hose, all things not supposed to be good for newts - while we were there it was topped up again and the newts and the goldfish seemed to enjoy the water movement. We also noticed that when our friend fed the goldfish the newts seemed very interested in the fish food too!
That evening we visted the Moorhouses at Foxhill Barn B & B, and sat outside as darkness fell, the swooping swallows and swifts giving way to the tiny Pipistrelle bats hawking for moths and other insects attracted to the outside lights.
Posted by Elizabeth Louise Mills at 02:05 No comments: