We had a lovely afternoon at Leighton Moss last week and saw some fantastic views of Marsh Harriers. As soon as we'd parked up we could hear the raucous calls of the Black headed Gulls and could see them wheeling overhead. Went to watch them at Lillians hide and also the large numbers of Coots that had gathered with young of various ages. At the Eric Morecambe hide we were treated to the sight of a Stoat running along the far bank setting off a flock of Black Tailed Godwits. Once they'd spotted it they all turned and ran towards it - smart really keeping a potential predator in view and must be quite intimidating to have a flock of birds running at you. Saw Avocet, Greenshank and Oystercatchers one of which was lying on its back in the sun - sunbathing? We went to the next hide along and the Stoat turned up again, investigating holes in the bank, probably for voles. On a little island we watched one adult Heron with two very teenage looking young, wilting in the sun, eventually one lay down in the grass. Late afternoon at the Causeway hide and we saw Marsh Harriers making food passes and some spectacular stoops. I think we also saw a Black Tailed Skimmer sunning itself on the hide, no expert though, but using a very useful FSC guide to Dragonflies we'd just bought in the shop! 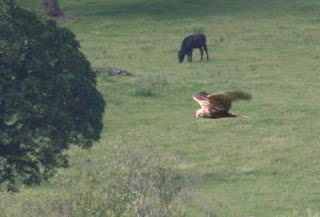 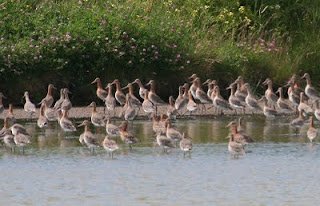 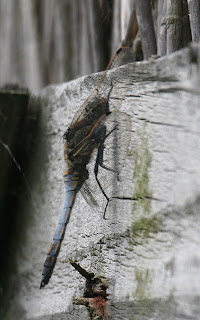