Just seen our first Swallow of the year, a female coasting over the marshy fields behind the house. Nice birthday present for me but worried as the forecast for overnight is for gales and heavy rain. One swallow definitely doesn't make a summer. We are settling in and its amazing how quickly the local wildlife has cottoned on and since putting out food and mowing the lawn we have suddenly become a prime territory worth fighting for. Two equally matched Robins were particularly brutal rolling around the lawn attempting to stab each other in the chest with their beaks. At least one did survive as I  heard it singing later. Two female blackbirds had a scrap one dragging the other by a wing past the kitchen window while I was washing up. We did have three baby rabbits coming into the garden to eat my newly planted perennials - an ornamental Bistort being favourite. Barrie pointed out if I didn't want rabbits in the garden I shouldn't put out rabbit food (bird seed). I was going to try the strategic placement of Ferret poo but now there appears to be no need. A feral cat turned up for a few days and the bunnies are no more. 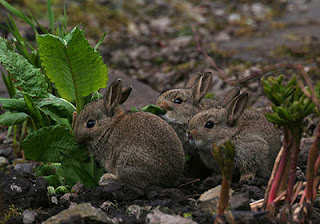 Posted by Elizabeth Louise Mills at 01:35