Everyones enjoying the sunny weather. The rabbits are sunbathing in the field and we've noticed one of the pheasants is very particular about coming back to the same spot to sunbathe. Unfortunately a large rabbit likes the same place and they end up almost side by side. We thought the Redstarts had deserted us but saw the male chase the female into a hole in the wall and then sit outside chattering at her as his tail quivered. He's  been in and out with food so fingers crossed.  We have seen Treecreepers going in and out of a crack in one of the old beech trees and a pair of Blackbirds turned up with a very noisy fledgling that chased them round the garden begging for food and on Monday morning  I heard a cuckoo calling in the woods. In the drystone wall under the sunflower seed feeder we have a family of voles that rush out for the bits the Siskins drop - like the Coal Tits they are very nervous of the bullying Siskins.  We had a pair of Blackcaps for a day and a pair of Redpolls regularly visit but are bullied by the Siskins. We see a pair of Pied Wagtails with beaks full of food but haven't spotted the nest yet. Swallows are going in and out of the barn but don't seem to have built a nest in there. The crows are getting nervous when the Buzzards fly over and we think the Buzzards have a nest by the lane. A Grey Squirrel has also started visiting us, it's nervous of the washing blowing on the line, squinting myopically at it and starting back as it blows towards it.  The hedgehog has been released but still comes back (or one comes back) for a dish of catfood at night. 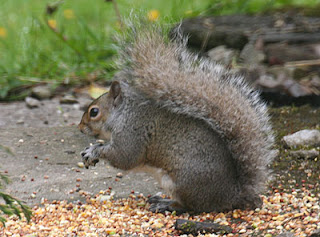 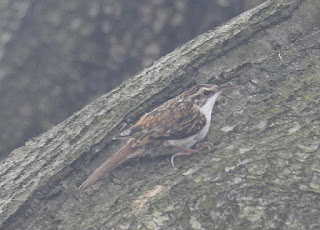 Tree Creeper by crack where nest is. 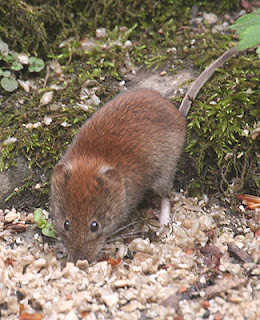 Posted by Elizabeth Louise Mills at 04:17