Found a stunned young Siskin lying by the window panting heavily. Put it in one of the wire seed trays on the feeder then sat some distance away looking out for the Sparrowhawk and cat. Looked wobbly and kept shutting its eyes and attracted the attention of a Great Tit and another Siskin who kept hopping around peering at it. Took off after a few minutes. Went for a late afternoon walk on the tops above Slaidburn, watched Stone Chats, Whinchats, Meadow Pipits and Skylarks. We found two Dor Beetles climbing around in the grass, dark blue and iridescent especially below. Crawled clumsily over my hand and one had several mites on its underside (a common name is the Lousy Watchman). A pair of Dor Beetles find some dung and the female digs a hole under it with little chambers off. The male clears the excavated soil and brings in more dung to go in the chambers. The female lays a single egg in each chamber and once hatched the larvae feed on the dung before emerging in spring as beetles. Dor beetles and larvae have to eat their own weight in dung every day so they are really important natural recyclers. On the way back we found a large patch of round-leaved Sundews glistening in the sun. Went up to the cafe at Stocks Reservoir and had chips while watching the flocks of Curlews and Oystercatchers. A female Great spotted woodpecker brought two juveniles in to feed, they kept begging and would'nt feed themselves and she looked very exasperated. Redpolls and Long Tailed Tits also turned up. 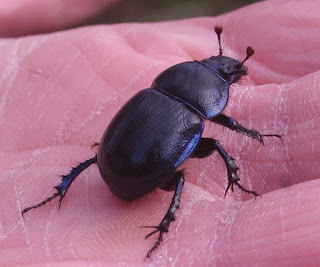 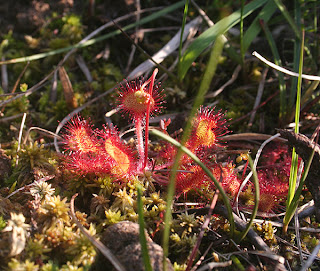 Posted by Elizabeth Louise Mills at 01:56