I noticed these bright red blotches on a Conference Pear and a William Pear in a friends garden, when I turned over the leaves there were gall like outgrowths on the underside. A quick web search identified it as pear rust caused by the fungus Gymnosporangium sabinae which has spread from the continent in recent years. It lives on pears over summer releasing its spores in autumn and then overwinters on junipers which produce an orange spongy outgrowth from cankers in the bark in spring which reinfect pears. It is most common in humid conditions and seriously affects pear yield on the continent. 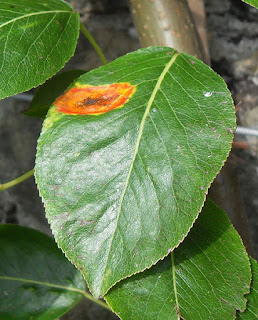 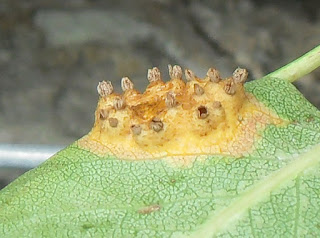 Posted by Elizabeth Louise Mills at 00:18