While I was sketching some pine cones something scuttled out and went between the leaves of my sketchbook. It was a tiny pseudoscorpion. They live in leaf litter and inject other tiny creatures with paralyzing venom delivered from their tiny pincers and then cover them with a liquid that soupifys them prior to ingestion. When they think they are under attack they pull everything in and look like a tiny speck of leaf litter. They are incredibly beautiful and its just amazing to watch something so tiny. 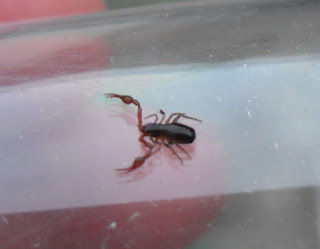 Posted by Elizabeth Louise Mills at 02:25